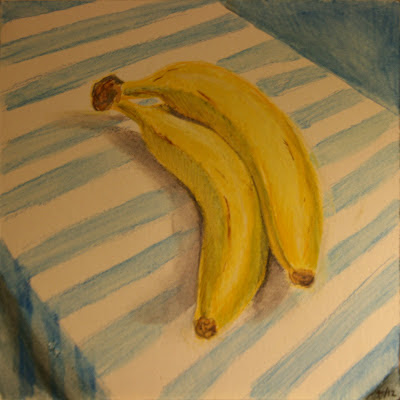 This is possibly the first piece I've done in paint (or at least in a paint related medium) that I both enjoyed making and enjoy looking at. I mean, no, it's not the best painting of bananas in the world, or even a very good painting. What it really represents is the first time I've worked with paint without suffering the whole time. The mixing, the mess, the migraines. The infinitely vindictive task of matching the colors and tones you either desire or have already applied. I've hated paint, vigorously. Until now.

This little pair of bananas came right off the top of my head. Only because I had been sketching bananas in a months long preparation to paint some, in either acrylic or oil. And I had given up on the idea that I ever would actually paint the damn things, because I hated working with paint so much. But then, seemingly on a whim, I asked my girlfriend if she still had a set of water color pencils I had once seen in a drawer. She did still have them, and I mindlessly began applying some colors and shapes to a piece of illustration board.

Grabbing a brush and a cup of water, I began washing over my energetic colorings and forming vibrant lovely little blocks of potential fruit. I quickly found out that illustration board is a shitty medium when it comes to applying a lot of water on a brush. After just a few applications, it began to pill and crumble under my relatively light strokes. I also found that in my haste, I hadn't considered my lighting or color choices very well. I also hadn't realized that the gray I had hoped to reduce the tones of my hues with was tinted with a lot of blue and subsequent mixing turned the bananas an unappetizing over ripe green (which is weird in a banana). But none of that mattered to me. I was having fun. I was laughing every few minutes as I worked. Although I was being slapdash and had no idea what I was doing, I was beginning to see what I should do, and how I could proceed more carefully in the future. Something I have never been able to do while painting.

Anyway, I'm very excited. I think this marks a turning point in my relationship to both color and paint. It is not to say I've found my perfect medium, but what I have found is a gateway into painting.