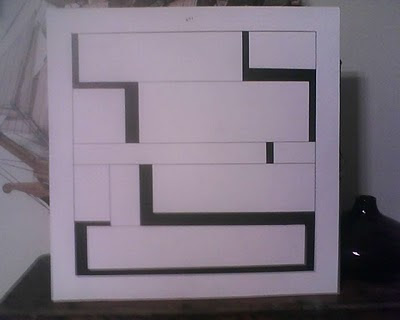 First assignment complete for the semester:

On a 12"x12" square of cold press illustration board, divide a 10"x10" space into 10 rectangles. Accompanying the rectangles will be anywhere from 2 to 4 continuous lines (which can't break the edges of the rectangles in any way that would make them more than four sided... if that sort of makes sense.)

the focus of the composition should hit three major points:

On grid-paper, we started out with 10 rough 3"x3" drawings that would fit the assignment's criteria, and then narrowed those down to the best five. Those five were then blown up, by hand, into 5"x5" grid-paper sketches. The drawings were reworked and adjusted to fit the three focuses of the assignment.

The 10 sketches for just the one drawing had interesting results. The first sketch, I thought I had a great idea and that BANG I'd just nail it right away ('cause I'm kind of full of myself). So I did the next one a little half-hearted. By the third I was kind of bored. On the fourth I started bending the rules.

outside of the assigned ten, I probably did a dozen different sketches, trying to find something that fit the criteria, but that looked nothing like the provided example. Simple as the assignment was, I couldn't stop thinking of interesting solutions, purely because I was forced to make a series of sketches that would all but one be completely discarded. I had to make one that would count.

I think the six or seventh sketch got closest to my final design, and eight, nine and ten were disasters that went way out of the way of the point of the exercise.

The final best choice was transferred to a 10"x10" area blocked out on the 12"x12" piece of illustration board, and then inked with micron pens and India Ink, applied with a brush.