I drew the first thumbnail sketches of Desert Hare Hernandez a good while ago at this point. It came about as part of my daily drawing exercises. I decided to juxtapose two sketches of photographs to see what kind of story the two drawings would imply. The first drawing was of a lounging gal from a "french postcard", and the second drawing was from a photograph of Frida Kahlo. The resulting contrast put me in mind of a scene in From Russia With Love, in which Ali Kerim Bey is lured away from paper work at his desk by his vamping mistress, who ends up having unwittingly saved her guy from an assassination attempt (via a limpet mine stuck to the wall outside his window).

What followed was the concept of an action hero in the form of a woman artists/writer, and hence the Desert Hare was born.

It only took me another year or so of more or less continual struggle to figure out how to flesh that character out. The newly minted page at bottom is the cleanest attempt so far, and represents a process that may make it feasible for me to bring the adventures of Mary Ellen "the Desert Hare" Hernandez to life.

presented here is that original page: 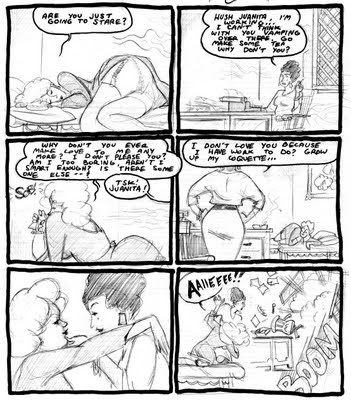 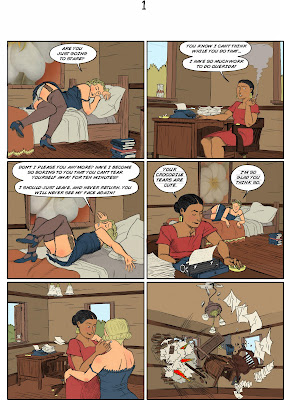 In just over a year! woo!